Remembering His Highness Sri Kantirava Narasimha Raja Wadiyar Bahadur, G.C.I.E., the late Yuvaraja of Mysore, born on the 5th of June 1888 in Mysore. Often lacking mention due to walking in the enormous shadow of his brother, H.H. Sri Krishnaraja Wadiyar IV, The Maharaja Of Mysore, the Yuvaraja was no less important in the development of The Kingdom of Mysore into the model state it became.

His thought and insight was instrumental in constructing many of the reforms and policies implemented. This is what His Late Excellency, The President of India, Dr. S. Radhakrishnan had to say of him:“I had several opportunities of meeting His late Highness the Yuvaraja Narasimharaja Wadiyar Bahadur of Mysore.

The first impression he made on me was one of natural friendliness and warmth. His brother His late Highness the Maharaja Krishnaraja Wadiyar gave one the impression of a remote but enchanting Spirit, who lived on hidden heights, even when dealing with the concrete problems of the State.

One felt that he was giving to society not more than a fraction of himself. Not so the Yuvaraja. He had the heart of a child and made you feel quite at home in a moment.

He would fall into conversation with anyone he met without a touch of aloofness or constraint.There was no sense of pride or superiority. His inborn grace and unassuming dignity endeared him to all.

He had a profound desire to raise the general condition of the country and the status of women. Knowledge obtained, by wide travel tended to purify and sharpen his perception of the Indian trouble.

His speeches bear witness to his throbbing love for India and intense loyalty to civilised Values. In them art and politics, caste and democracy, the malaise of our country find just and humane illustration.

Life gave him so much ambition and so little help in realizing it. In several moods I found him examining the purpose of life and seeking in various forms to live it as it should be lived.

On the whole he was an energetic, quick-witted, rather lonely, man who concealed his feelings beneath an air of gaiety. In travel he found his refuge from reality.

He lived most fully in the world of his own making. It will be long before anything will dim his endearing charm and understanding mind.”

Many age-old industries in Mysore – particularly handicrafts – are suffering due to the pandemic. Tourists are no longer thronging

How to deal with Mobile Addiction ?

Ping! Whether it’s Facebook, Whatsapp, Instagram or whatever, are you constantly distracted by your mobile? Nowadays, most of us are

Oxygen Expresses Delivers Over 28,473 MT of LMO to the Nation

More than 400 Oxygen Expresses have completed their journey delivering Oxygen across the country LMO offloaded to States so far:

Since the vaccination drive began in India on 16 January 2021, 23.88 crore vaccine doses have been administered up to

What is 6-minute walk test to check if a person has low oxygen level in body?

Visuals on Twitter showed a massive plume of black smoke pouring out of the top floor of a building. A

Dozens of the world’s leading websites including  Reddit, CNN, The Guardian, the UK government and others went offline on Tuesday

Now you can experience Nagarahole from home

The University of Mysore, in association with a Hyderabad-based pharmaceutical company, has designed a rapid COVID-19 detection kit. Announcing this

People can buy essentials on Monday, Wednesday & Friday from 6 am to 10 am. Deputy Commissioner Rohini Sindhuri on 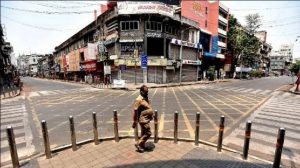 Lockdown in Karnataka extended till 6 am on June 14